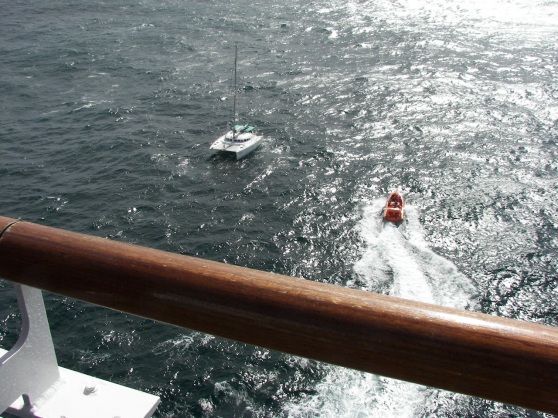 The Tasman Sea had thrown, thrashed, and rattled them for eight long days. There was nothing on the horizon but heaving swells of wind-strewn ocean. The nearest landfall was two hundred miles away, and the five hapless souls on the 40-foot “Lagoon” were sick and dehydrated – and no one knew where they were. 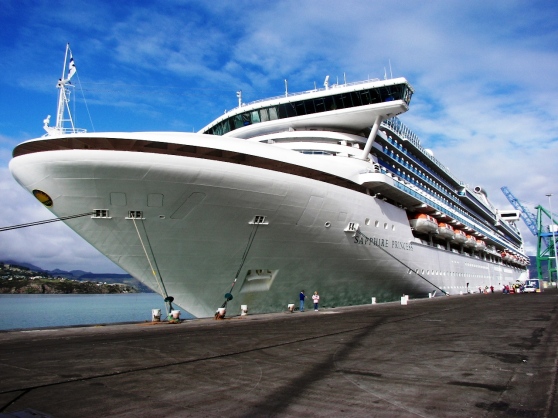 We were aboard the Sapphire Princess and making our way to New Zealand — across the Tasman Sea from our last port of call in Hobart, Tasmania. The Sapphire Princess is a cruise liner that is almost 50% larger than the original Queen Mary, and at 116,000 tons rides over rough seas with nary a roll.

During our second day at sea, we had an after breakfast appointment to interview the ship’s captain for our story. 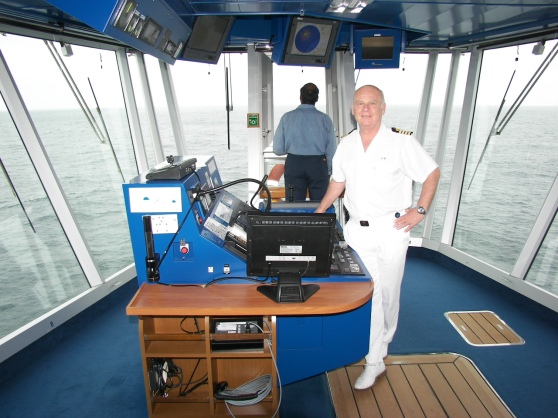 Captain Nick Bates was waiting for us when our escort led us to the bridge. After a few minutes of introductions and casual conversation, the captain started to show us around his “office at sea.”

Thirty-five minutes later, we were winding up our interview and bridge tour when a staff officer approached with news of a mayday alert. A 12-meter catamaran had just sent a distress signal and soon after, communications failed. The boat was not able to give its exact location and the Sapphire could only capture limited information before the communication blackout.

Ships at sea must respond to a mayday call, and Captain Bates went into immediate action. A search grid was established based on the information provided by the distressed vessel. The Sapphire was ordered to increase speed and the ship began to comb the vast sea in a defined pattern.

The Captain made an intercom announcement to the entire ship’s company and passengers. He explained that he was interrupting our itinerary to search for a small craft in distress.

The passengers were eager to help

Hundreds of passengers armed with cameras and binoculars crowded the deck rails in hopes of being the first to spot the struggling sailboat. One hour past – then two. Finally, there was a sighting and the intercom screeched the point of reference for the onlookers.

We watched anxiously as the Sapphire approached the waiting catamaran. We came to a stop about 500 yards from her position. She looked in good order with her sails and equipment neatly stowed. If it were not for the pitching in heavy seas, the sailboat would not look like it was in any trouble at all.

Princess to the rescue 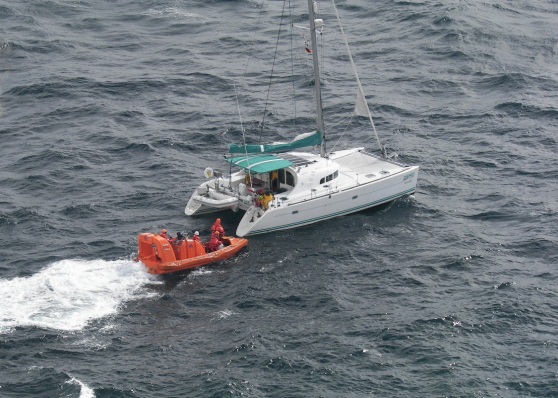 The Captain dispatched a trained rescue crew on a special craft that was alongside the sailboat within minutes. 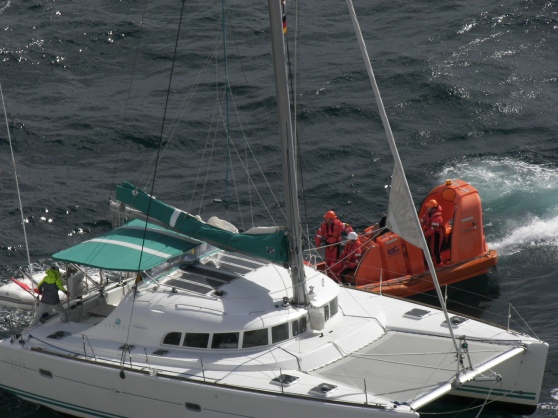 It took a few additional minutes to load the catamaran’s crew onto the rescue vessel and return to the Sapphire. The sea-weary sailors were rushed to the Medical Center where the ship’s doctor and staff were waiting to assist.

Forty-eight hours after we took the ailing yachtsmen aboard, each passenger cabin received a group letter of thanks from those who were rescued.

The letter described their harrowing 8-day journey from Tasmania to New Zealand. The last two days of which were spent attached to a sea anchor while 45-knot winds washed large breaking waves over the entire vessel. On the 8th day, one of the sailboat’s seasick crew members became unresponsive and incoherent, and that was when they decided to issue the mayday alert.

We have been on many cruises, but this was our first rescue at sea. It was handled with professional precision and an efficiency that is a credit to Princess Cruise Lines, Captain Bates, and the entire crew of the Sapphire Princess.

The rescue made for a very Happy New Year for some grateful Canadian sailors!